What is the Small Diving Oxygen Tank Filled With?

When it comes to scuba tanks, many people blurt out that they are oxygen tanks. This misunderstanding is not a layman. Even some divers often talk about oxygen tanks, which may be just a slip of the tongue.

1. Do you know what is a scuba tank filled with on the diver's back?

When you experience diving or just start ow courses, you must use compressed air, which contains 21% oxygen, 79% nitrogen and a small amount of helium (just like air).

Later, even if we became high oxygen divers, the gas in the small diving oxygen tank was also called high oxygen air, not high oxygen.

High oxygen air is a gas with oxygen content greater than 21%. Generally, the proportion of oxygen in the high oxygen air used by divers is between 28-40%, and the most popular mixed oxygen concentration is 32-36%. 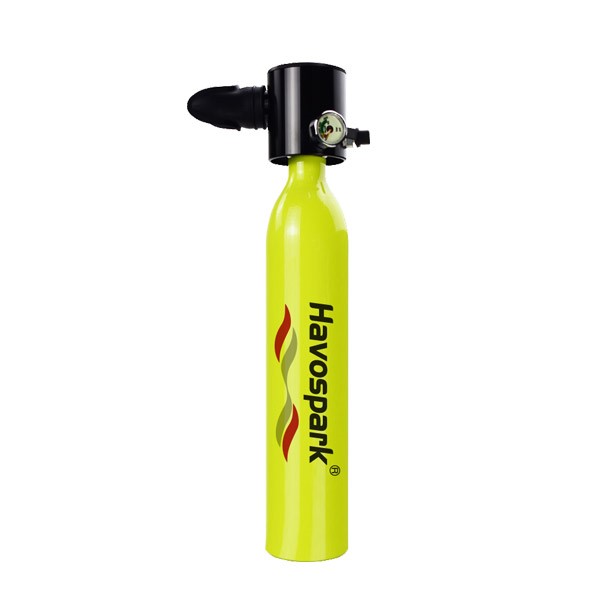 2. When diving with a small diving oxygen tank, will there be insufficient oxygen?

The oxygen content of compressed air is 21%, which is the same as that on the ground. If 21% oxygen is not enough, even if we are not divers, would we have suffocated more than 10000 times!

In fact, diving with a small diving oxygen tank is suicide. First, let's introduce the concept of partial pressure. In short, it refers to the proportion of part of the gas to the whole gas.

The ratio of depth to oxygen is the condition affecting the oxygen partial pressure (the standards are 1.4ATA and 1.6ATA).

3. Why does the small diving oxygen tank use such a complex gas ratio?

Because the effects of various gases on the human body will change under high pressure. Every 10 meters underwater, the pressure increases by about one atmospheric pressure. Even the simplest air, its two main components may cause danger to divers.

When nitrogen under high pressure is integrated into the body, in addition to diving diseases that may be caused by rising too fast, small diving oxygen tank will appear nitrogen intoxication at too deep (generally more than 30m), which is like drunkenness. It is said that it will be dizzy, slow reaction, loss of judgment, etc.

More than 30 meters deep, there is a great possibility of nitrogen intoxication. Therefore, helium will be added to deeper technical diving to avoid this problem.

The disadvantage of helium is that it is very expensive. A gas cylinder with helium costs hundreds of dollars. In addition, the voice will become ridiculous after breathing.

Nitrogen is not the only intoxicating gas in the small diving oxygen tank. Almost all gases except helium will have the effect of "intoxication", including oxygen and carbon dioxide.

Therefore, diving tutorials will repeatedly emphasize that the movement should be controlled, rhythmic, not panic, and try to avoid violent movements.

To remind everyone, in order to avoid contaminated gas in the small diving oxygen tank, you must choose a reputable and regular diving center when diving!

The Difference Between Survival Suit and Life Vest

What Are the Types of Boat Life Saving Equipment?